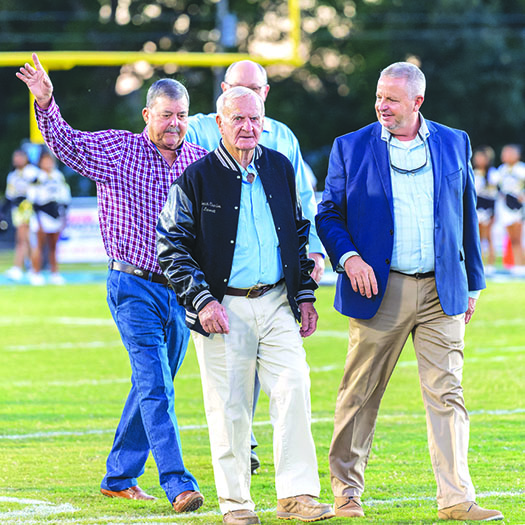 Charles Leverette graduated from Clift High School in Opelika in 1952 and now has been honored in Montgomery.

During his time at Clift, Leverette played football and baseball. Under then-coach Sam Mason, the football team went undefeated — 10-0 — in Leverette’s senior season.

Upon graduation, Leverette was awarded a scholarship to Livingston State Teacher’s College upon graduation. In college, Leverette earned his bachelor’s and master’s degrees, and lettered in football during the 1952-53 season, and the 1955-57 seasons, according to Alabama High School Football History.

Leverette was drafted into the military (when) and stationed at Ft. Carson in Colorado, where he continued his athletics journey.

Leverette was then transferred to Germany as part of his service in the Army, and while stationed there, he was assigned to Special Services, all the while participating in football. His football team would go on to win the European Championship.

Leverette took on many titles in his life, including college graduate, Army veteran and teacher. He even earned the title of Mobile County’s Young Educator of the Year early in his career, something Leverette is hugely proud of, he said.

But maybe the most notable title Leverette held in his adult life was head coach of the Mary G. Montgomery High School football team (back then it was called Semes.).

Mary G. Montgomery High School renamed its football field on Sept. 30 for Leverette, who led the Vikings to their only undefeated season (10-0) in 1965.

“It’s the highlight of my life as far as something like that,” Leverette said. “I really appreciated it and it really brought back some old memories, because we had some good ones … I thought they forgot about me after all these years, but they remembered.”

Family, friends and colleagues gathered to honor Leverette, 87, who was the school’s first head football coach to lead the team to an undefeated season. He held the position for 10 years, amassing a 67-29-3 record. Where MGM plays on Friday nights will forthwith be referred to as Charles Leverette Field.

Leverette’s 1965 team (his third season) has stood the test of time and remains one of the best in school history. The Vikings that year averaged 34.2 points and allowed just 9.8 points per game. The quarterback of the 1965 team, Tommy Davis, went on to receive all-state honors and be named to the Alabama All-Star game alongside guard Maurice Goodman. Leverette would coach the South squad of the Alabama All-Star game in 1966.

“They were the smallest team I ever had,” Leverette said of his 1965 squad. “But they were determined to win and refused to lose. [We] had some great ones.”

Leverette’s first high school head coaching job was at Washington County, where he coached for over four seasons before moving to MGM. After leaving MGM after the 1972 season, Leverette waited three years before taking a job as head coach of the Shaw Raiders (Columbus, Georgia), where he helmed the program from 1975 to 1980.

Leverette officially retired from coaching in the 80s, with a career record of 108-82-7. Today, he lives in Sumpter County, Alabama. His work, however, will continue to reverberate across the state now that he is immortalized with Charles Leverette Field.